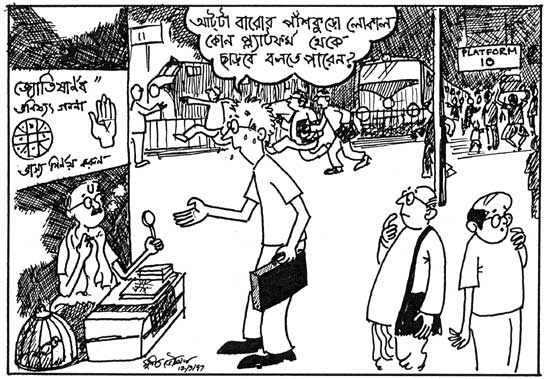 Many of us are strong believers in astrology and other similar practices like palmistry, tarot cards etc. etc. that claim to predict one’s future. A huge industry runs on servicing such people and also provides employment to millions. The television and other media advertisements of such sooth sayers and fortune tellers prove that they earn enough money to invest in these marketing campaigns. The precious and semi-precious gem stone market in India depends on the belief that the negative influence of the planets and stars can be countered by wearing a specific kind of gem stone that can cost thousands of rupees. Circulation of newspapers and magazines thrive on the so called accuracy of their horoscope/sun-sign columns. It should be a topic of serious investigation by psychologists as to how can a large segment of the population be swayed to believe that the future events of their life depends on the time of their birth or is scribed in the lines in their palms. It is true that sometimes such predictions help boost ones confidence, or provide them with some kind of mental strength to deal with an unforeseen event whether it happens or not. But in many cases it rather acts the negative way, pushing someone into desperation or even depression, leading to serious consequences.
However, I feel that these predictors of future can be utilized in rather useful ways as seen in this cartoon. If one could predict when a train would depart, or whether a flight would be delayed or not, it would be a great service to people like us.

One thought on “Cartoon of the Week 13: Prediction”