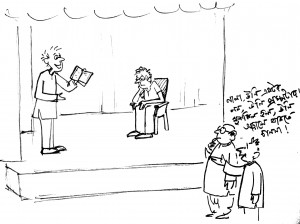 No, No, He is not the actor. He is the prompter. The problem is, he doesn't want to stay behind the curtain.

Prompting in theatre is now a dying art. Most theatre productions hardly use prompters these days. The actors are expected to memorize their lines before they even think of getting up on stage. But not too long ago, prompters were an essential part of any theatre. Two prompters would sit on two sides of the stage, hiding behind the wings and in a soft voice read the lines for the actors. The level of their voice should be such that it should be audible only to the actors on stage and not to the audience.   This requires special skills. Also, for the actors, they need know how to perform with constant prompting going on from the sides. Hence prompters also need to rehearse with the actors. One of the greatest virtues a prompter should possess is to be selfless and not to look for audience appreciation. The actors collect all the accolades and applause, while the prompter need to stay satisfied with an occasional thank you from the actor. That too if he is lucky.  Most of the time a prompter would have memorized all the lines of all characters and can possibly perform better on stage if given a chance.

But for the prompter, many actors wouldn’t have reached their pinnacle of fame and fortune. I have seen many famous actors who wouldn’t say a single line on stage without the help from prompters.  In USA, when theatre productions come from India with star studded cast, the prompters are left behind to cut costs. Local actors volunteer to prompt  these famous stars of the easter years.  But sometimes, unfortunately, age catches on to these senior actors and their hearing loses its sharpness. And this often results in a tragic situation on stage. The prompter yells at the top of their voice from behind the wings, while the actors echo them. This results in a cacophony that the audience needs to suffer.

But I guess, these days prompters are also demanding their rights to be recognized. Few years ago, we were invited to perform our play by one of the north American organizations.  Before our play, the organizers themselves were scheduled to perform a play. From back stage we noticed that they had elaborate sets on stage. And behind each structure, there was a person with a copy of the script in their hands. On inquiring we were told that the director didn’t want to depend only on two prompters on the sides, but also wanted to place few of them strategically on stage such that his actors have access to the lines from any point on stage.  I didn’t have the opportunity to witness the final result, but one of the actors confessed that the play was cut short by about half an hour due to missed lines. But the director was indeed grateful to his team of prompters. Their names were printed in big bold fonts on their commemorative brochure along with the actors.

2 thoughts on “Prompting – A Dying Art”