When Pranay learned that I write plays, he requested me to write a play on this issue. I thought about it for a while, started delving into some research and even contacted couple of medical practitioners who deal with HIV/AIDS. However, I had no intention of writing a play that only deals with the issue of HIV/AIDS. I wanted a bigger canvas, a canvas where our lives (as immigrants in the country) are intertwined with those of our friends and family in India. If we look back to the history of HIV/AIDS in USA, the story was not any different from what it is in India now. Films like “Philadelphia” and plays like “Angels in America” depict the social apathy during the 80’s and 90’s towards HIV and AIDS victims quite vividly. Hence, for a person who has encountered that situation in USA from close proximity – another encounter at a different time and space would be quite painful to say the least. And from this evolved the play, Banaprastha (The Retirement).

The play Banaprastha tells the story of a senior virologist Dr. Parijat Sen, who returns to 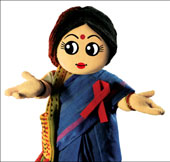 India, after retiring from his medical practice of 35 years, to find peace, tranquility and solace amongst his family and old friends. But soon he discovers that his nemesis has followed him and he has nowhere to hide.

The play, on multiple levels, depicts the rapid change in the economic, social and cultural life that is happening in India today due to the effects of globalization. The changes are too drastic for a person like Parijat Sen whose perception of his native land is nearly unchanged from the time he left for the U.S. But when he arrives in the city of his youth, he finds that there is hardly any difference between the middle-class life in New York and that in Kolkata. And in the process of his rude awakening, he encounters his old nemesis – the Human Immunodeficiency Virus or HIV. He finds that the virus has climbed its way through the social ranks and is now infiltrating the middle class. Dreadfully he also finds that this so-called educated and enlightened society is in a state of denial and refuses to deal with the disease – just the way he saw it happen during the early days of his career in the States.

The play was first written during the 2004-2005 time frame. It was again thoroughly revised during 2008 and 2009 when it reached its current form. The rapid changes in dealing with this disease in India were one of the main reasons for the revision. In 2004/2005 Bula-di was an unknown entity in Calcutta. Now, Buladi (the cute little doll) is everywhere spreading AIDS awareness in the most gentle way possible. AIDS awareness has gone a long way in these 4/5 years, but lot more needs to be done to make a lasting impact.

Please join me along with the cast and crew of “Banaprastha” on May 16/17 and 30/31st at the Edison Valley Playhouse (Edison, NJ) to show our solidarity with the people around the globe who are fighting this epidemic of our times.

2 thoughts on “Banaprastha and AIDS – The Genesis”