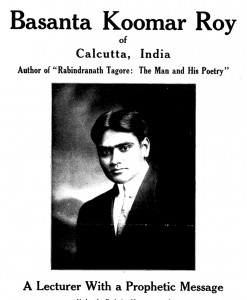 In 1910, a young Bengali student from Calcutta arrived at the University of Wisconsin to complete his BA degree. His name was Basanta Koomar Roy.  In those days, coming to America for higher education was a growing trend.  Rabindranath Tagore pioneered the trend by sending his son Rathindranath to USA for studying agriculture for he felt that “It is better to be a farmer from Illinois than to be a gentleman from Oxford!” Basanta Koomar being an ardent fan of Rabindranath, was most likely inspired to come to America for the same reasons. He later mentioned (in his publicity brochure),   “… by receiving an American education he would be able to serve his Motherland more efficiently.”  And although he did not go back to India, he did serve his Motherland handsomely.  Basanta Koomar took up journalism with a mission to bring India closer to America.  During the early part of the twentieth century, information about India came to America filtered by the British media. The nationalist uprisings in India, the literary and cultural renaissance taking place in Bengal was hardly noticed in America. Basanta Koomar took upon the duty to inform the Americans about India. He wrote in almost all major American publications about  British misrule and atrocities in India,  about the art and culture of India, as well other social, political and cultural issues.  However, the pinnacle of his career came when he published the first ever English biography of Tagore, “Rabindranath Tagore – The man and his poetry” in 1915, less than two years after Rabindranath was awarded the Nobel prize. But Basanta was writing about Rabindranath for quite some time then, and the book was essentially a compilation of his earlier articles. His first article on Tagore was published in the July issue of “The Open Court” in 1913, well before the Nobel prize announcement.  According to Sujit Kumar Mukherjee, the noted Tagore researcher, Basanta Koomar Roy was one of the three people primarily responsible in making Rabindranath well known to the West. The other two being W. B. Yeats and Ezra Pound.   Basanta Koomar’s biography of Tagore was a huge success and it was more popular than several other biographies that were published during the post Nobel prize era. The critics liked it mostly because it was written by a fellow Bengali who read Tagore in his mother tongue and not his translations.  His articles and translations  on Tagore were in high demand. He toured around the country lecturing about Rabindranath and his works.

But after 1916, Basanta Koomar seems to have stopped writing about Tagore for reasons that we can only speculate about. He became more active with the Indian nationalist movement and was working closely with Taraknath Das, Lala Lajpat Rai and others. During that time, the American immigration authorities (under the influence of British agents) were actively pursuing deportation of  Indian immigrant laborers. Basanta Koomar along with his colleagues (Taraknath Das, Agnes Smedley and others) fought against the Immigration authorities in US courts and freed these Indian immigrants held in detention.   He was an active member of the Friends of Freedom for India, and the editor of the India News service. He kept on writing about the social, political and economic issues in India. But those articles hardly mentioned about Tagore.  He also later translated and published  Bankim Chandra Chattopadhyay’s novel Anandamath. He was also an actor and had acted at the Neighborhood Playhouse in “Salut Au Mond”, a play based on Walt Whitman’s poetry.

Although Basanta Koomar stopped writing and lecturing about Tagore, but from Tagore’s biography (by Prasanta Chandra Paul) and other sources, we know that Basanta Koomar did not sever his relationship with Tagore. Basanta met Rabindranath during his later US trips and even arranged for his lecture.  Rabindranath too seems to have received him quite pleasantly during these meetings. In one letter (during Tagore’s 1916-17 US trip)  Rabindranath’s secretary Pearson wrote to his son  Rathindranath about his meeting with Basanta Koomar, “… your father is always very magnanimous to him.”

Today, Basanta Koomar Roy is a forgotten name. He is only known to a handful of people of this generation. But as an Indian American, I feel that we have been unjust to this man.  Basanta Koomar may not have always  followed the journalistic norms (although that’s a topic for a separate debate), but his contributions were significant. The recognition we have as Indians to the American people, we owe quite a bit of it to people like Basanta Koomar Roy, who was possibly the first Indian American Journalist.

My play “The Last Flames” is an homage to this predecessor of ours, as much as it is to the  great poet Rabindranath Tagore.