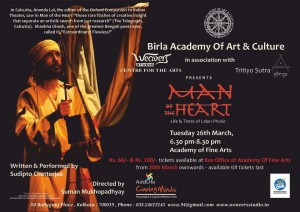 Man of The Heart

During our second broadcast of the EBC Radio Club on EBC Radio, we had a long telephone chat with Sudipto Chatterjee, a distinguished theatre person who teaches Drama at the Loughborough University in UK. In this part of the show, Sudipto talks about how he conceived and planned his highly acclaimed one person docudrama, “Man of the Heart”, which was directed by Sumon Mukhopadhyay.  The podcast of the first part of the show is given below.

Following is a brief biography of Sudipto Chatterjee:

With a PhD in Performance Studies from New York University, Sudipto is a scholar/playwright/performer/director from Calcutta, India. His book on nineteenth century Bengali theatre history, The Colonial Staged, was published in 2007 by Seagull Publishers (Calcutta, London and New York). His academic work has been published in several international anthologies as well as journals like The Drama Review, Theatre Survey and Theater Journal. The author of sixteen plays in Bengali and English, he has directed several plays including Nuraldeen’s Lifetime (by Syed Shamsul Haq) in New York and Calcutta, Girish Karnad’s Hayavadana, Badal Sircar’s Bhoma and J. M. Synge’s The Playboy of the Western World (all in Boston) and its Bengali adaptation Birpurus (in Calcutta). His first anthology of Bengali plays, Abhiropan, was published in 2005. In 2006, he directed Manjula Padmanabhan’s Harvest at the Department of Theatre, Dance, and Performance Studies, University of California Berkeley, where he was an Assistant Professor. Chatterjee has also made two documentaries, one of them, Free To Sing, on the singer-songmaker and politician Kabir Suman. After several years in the USA, Chatterjee is currently Senior Lecturer of Drama at the Department of English & Drama in Loughborough University, UK. He is currently working on two new plays, Othello’s Occupation and Chisel. In 2009, he directed Ibsen’s Peer Gynt and Iranian playwright, Bahram Beyzaei’s Death of Yazdgerd in 2010. Along with Suman Mukhopadhyay, Chatterjee launched the Man of the Heart Project, a performance-cum-research undertaking on the life and work of Lalon Shah Phokir, in 2005 at the University of California, Berkeley. Since then, the project has toured the USA and various European venues. In 2011-12, Chatterjee received the “Interweaving Performance Cultures” Fellowship from the Free University of Berlin, which enabled him to develop the Man of the Heart Project further (www.lalon.org). In 2013, Man of the Heart tours India.