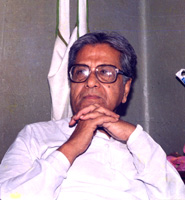 Last Sunday (Feb 28th 2010) the noted Bengali theater personality Kumar Roy died in Kolkata after a protracted heart ailment at the age of 84. Kumar-da was long associated with the theater group Bohurupee which he joined in 1949 and was a close associate of late Sambhu Mitra. He was a director, playwright and also an actor. He had done roles in several plays like ‘Gallileo’, ‘Rakta karabi’, ‘Baki Itihas’, Bisarjan and ‘Nabanna’ among others besides acting in films. He also worked as a professor at the Rabindra Bharati University. Kumar Roy also headed the Paschim Banga Natya Academy for quite some time. He had also penned many books. He was awarded the Sanget Natak Akademi award in 1983.

Although I never had the opportunity of meeting him in person, but had the good fortune of speaking to him few times. It was he who published my play “Ron” in “Bohurupi” (of which Kumar-da was the editor) the well known theater journal of Kolkata. He said how much he liked the play and thought it was an important addition to the repertoire of plays that Bohurupi has published over the years. Later, he also published another play of mine, “Satyameva”. He had asked me to meet him when I was in Kolkata. Unfortunately I never had the opportunity and I will repent it all my life. I hope and pray that his soul rests in peace.