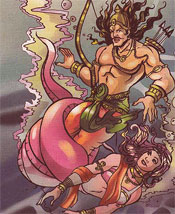 Dhritarashtra offered Pandavas the land of Khandava, a barren and uninhabited piece of land, to set up their Kingdom. To everybody’s surprise, Yudhishtira accepts the offer. In Khandava, the Pandavas setup their capital in Indraprastha, a grand city build by Lord Indra himself.  Rishi Narada tells the Pandavas the story of Sunda and Upasunda and advises them to setup a rule among themselves regarding the companionship of Draupadi with her husbands. But Arjuna had to break the rule to avoid a crisis. And as his punishment Arjuna goes into exile for twelve long years where he encounters several other romantic adventures. Listen to this intriguing episode by clicking on the audio player below. The episode can also be heard on iTunes. And join our Facebook page to stay updated.