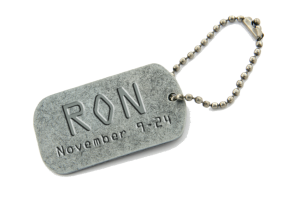 After a long gap of more than six years,  the internationally acclaimed play “Ron” is coming to NJ Stage once again. This time in English. The play, produced by Edison Valley Playhouse, will make its Tri-State premiere on Nov 9, 2012 and will have limited run till Nov 24th for 7 shows only. Show times are at 8:00pm on Fridays and Saturdays, and at 2:00pm on Sunday Nov 18th. Tickets are $15.00 each ($12 for seniors and students).

The play is written and directed by Sudipta Bhawmik, and produced by Bill Seesselberg.

Synopsis:
An original play set in the backdrop of the war in Iraq, “Ron” examines from a unique perspective the conflicts and tribulations of immigrant families as they try to assimilate into the ways of American life.

Ron (Ronobir) Mitra, son of a Bengali immigrant family, is

a member of the US Army National Guard and is currently deployed in Iraq. Ron’s parents, Animesh and Shanti, although not happy with Ron’s decision to join the US Army, respected Ron’s wishes to serve his nation. However, Ron’s deployment to active duty in Iraq has been a constant source of tension and anxiety. On the day of the play, at a small get together at Animesh’s place, Surojit Biswas, a writer and journalist from Kolkata challenges Animesh and his guests about their loyalty, their beliefs and their fundamental moral values. The party rapidly goes into a tailspin with each character exposing their secret wars that they have been fighting all along.

For more details keep an eye on this page. If you are on Facebook, you may want to join the page “Ron The Play” for regular updates regarding interesting aspects of the play.