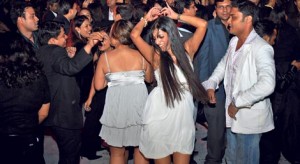 A Dance Floor in Kolkata

As I entered Some Place Else, a discotheque at The Park Hotel in Calcutta, I actually felt like I was indeed in some place else. Deafening music and alcohol flowing, the youthful revelers were in a boisterous mood. Specially what caught my eyes is the attire of the female members of the crowd and the minimal urge to cover the body parts. That’s what I realized, really jolted me a little. After all, it was not a place for me to be visiting, neither did I belong there. I was not only long past being a member of the twenty something generation, but I was quite unprepared for the the leap that Calcutta youth have taken. The reason for this intrusion was, getting my friend’s daughter home from a late night party. Indeed, her father was supposed to pick up her on his way home from the airport; his plane got delayed and I was called upon to do him a favor.

I am quite aware of the fact that the things have changed faster than I could keep up with; young people are different now, they act differently, they dress differently, their definition of propriety has a globalized norm. But when I visit Calcutta I am transported to the world I grew up in, the world before the advent of the internet and deluge of social media; our real world was what we felt and experienced and not the virtual world in the cloud.
I was not surprised or shocked at the scene inside the discotheque, far from it; but given the fact that it was Calcutta, my existentialist self was just a little slow in setting in. After a transcontinental leap and a few decades in between, I have never consciously tried to fill in the gap. I admit, it is purely my shortcoming that I have not made an attempt to familiarize myself with the realm of generation-X of today.
Of course, it’s all a matter of perception; it was a mild jolt because the scene was in Calcutta, far removed from the Calcutta at large and its economic reality even today. In the middle of privations and decay all around this little isle of gaiety looked almost unreal.
Here in America I guess our children dress or act the same way, I do not know for sure though, because I am not a witness to the recreational part of their lives. What I am a part of is our social life here which is totally contained in a cocoon of the people transported from Calcutta, includes a group of relatively younger late comers in the later part of the last century. They are the younger (relatively speaking) and colorful half of our social gatherings here. Having said that, the scene and the behavior of the crowd in my sojourn to Some Place Else, the discotheque, per se, should not have been unfamiliar to me, if only the players are different. They happen to fall in the category of forty something.
The dresses they wear cause a bit of cultural shock in the eyes of the beholder. Let’s face it, Hi-rise jegging, Skinny kick jeans with Lace tunic tank are not very enhancing on a near middle aged woman. But it is understandable. All these global fashion spread by the internet social media and the TV serials evoke two different desires in two different sections of the female population; a twenty year old wants to be with the trend of their generation; the ones with forty or fifty decades under their belts are desperately trying to catch up on their lost years. My heart goes out for the latter.
Body is all about proportion, and fashion is all about dressing those proportions and in some instances hiding the flaws to look their very best. This is unarguably an admirable goal if achieved successfully. Though sometimes that is easily said than done. Dresses that look good on a teenage body, misfires on an older wannabe or a foot long earring looks smashing on a slender neck serial actress but may be a bit out of synch for a woman on whom age has left the mark of extra chin.

On the other hand, when it comes to the subject of the conventional Indian attire and the desire to make it hip, attempt is directed at making it more revealing and nonconformist. In the world of women attire, nothing better has been invented than a saree in taking care of a richly endowed body. But I am afraid the great promise of a saree is not being fully realized by a large number of Bengali women, as I observe them at New-year eve parties and weddings. Take for example the fashionistas who take their clue from the TV serials where the key to more fashion is exposure of more skin. Problem is how do you manage what is under that skin. An upper body covering garment, also known as a blouse, worn with a saree was designed to take care of such eventuality. But blouse as we have always known it, is already an endangered species thanks again to the serial dramas on TV. A piece of clothing which you can call a garment on your upper body, not an austere narrow strip of linen, is not a definition of fashion any more. It never ceases to be a sartorial puzzle; how the piece which is still called a blouse is held together without any back support architecturally.
So my advise is: If a saree does not help you beautifying your proportions go for a dress with a faux wrap and wear it with a leggie under a hi rise boot. And of course there is always a fashionable Hi-lo maxi with the waist line a little lower than your waist. Sometimes concealing is more attractive than revealing. No one will dare call you old fashioned or question your place with the X-generation.