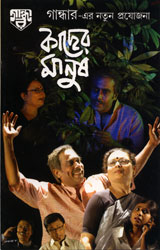 “Kaachher Manush” is based on a Marathi play by Dr. Sirish Athwale (translated by Kamal Sanyal) and directed by Gautam Haldar. The play tells the story about how two people from different social backgrounds can come close together through a metaphoric process of healing.  Dadaseheb (a Marathi Brahmin played by Debshankar Haldar) is suffering from a paralysis of his right side resulting from a head injury and needs physiotherapy and occupational therapy to recover. Savitribai, a senior dalit lady (performed by Bijoy Lakshmi Burman), has been appointed as a nurse to provide him with his daily therapy and help him during the day with his household chores. Dadasaheb initially opposed to this arrangement, especially to be under the constant supervision of a lower caste lady, but had to accept reluctantly.  And predictably enough, Dadasaheb’s physical condition improves under the strict regimen of Savitribai and at one point the widower Dadasheb even proposes her hand in marriage. Dadasheb is finally cured within a week’s time when his NRI daughter threatens to come and take him with her to USA.  The play is very well acted by Debshankar and Bijoy Lakshmi. Debshankar’s boisterous characterization of Dadasaheb has been well complemented by the cool and composed Savitribai of Bijoylakhsmi.  Parthasarathi Mukhopadhyay as the son was just appropriate. However, the character of Dadasaheb’s NRI daughter Maitrayee has been made into a stereotypical non-resident haughty woman whose concern for her father was made into a comical farce.  The director (and the playwright) should have paid some attention to modern physical and occupational therapy  techniques for the elderly, where safety and fall prevention is one of the key objectives.  The days of challenging the patient to walk on his own without any safety precautions is long gone with the days of black and while romantic films of Uttam and Suchitra.  Scenes like these help the actor to show a good deal of physical acting and even helps build audience tension, but is not practical at all and should have come with the notice – “Don’t try this at home with your parents.” Incidentally, Kachher Manush was staged at the 2010 Bangamela held in Nashville, TN and then it toured some of the mid-west cities, although it did not come to the US east coast.

The other play “Srinwantu Comrades” (Comrades, Lend me your ears!) is directed by the veteran thespian, Bibhas Chakraborty.  The play (originally written by the Russian playwright Satrov in 1977) tells the story about a day in the life of Vladimir I Lenin in 1920, when he was recuperating from an assassination attempt with two bullets in his body.   As the day progresses, Lenin receives visitors from his party, the government, the bureaucrats, the labourers, the farmers and even the socialites. And gradually Lenin realizes how his thoughts and philosophy for creating a classless proletariat society is getting distorted. The party, the govt and the bureaucrats are bent upon forcing socialism down the throats of the people and choking their voice in the process. While watching the play, one would invariably draw parallels with the current left front govt of West Bengal and their actions in the name of  Marxism, although at the very beginning of the play it was announced that the translator and director did not make any changes to the original text to make it sound more relevant. The play did not have any story line for that matter and was almost like a staged documentary. It requires a lot of attention on the audience’s part to stay focused on the play, as the play turns out to be talking heads for the most part.

One good thing I noticed was that on both days the audience turn out was quite good. The common complaint that I hear about the lack of audience was not evident at least for these two shows. I’d recommend both the plays to anybody who wants to watch good theater.

(NOTE: This article was previously published in Ananda Sambad.)