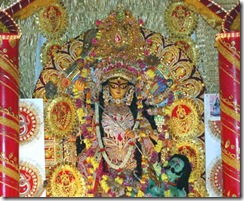 This year Kallol celebrated Durga Pujo with a new committee and with a class structure. Unfortunately, some of the enforcers of this class system had none of their own. As one long time member expressed disappointedly, “Green tag gulo holo citizender jonno aar aamra bakira holam bratyo.” Life members, other members, and those who attend the Pujo celebrations at Kallol regularly, were treated with disdain and contempt, if they had not paid up for the venerable “green card.” One attendee asked, “Amaar $150er kono daam nei?” There was no answer.

In addition to this, several rows in the front were cordoned off with yellow “caution” tape – “caution” to the plebeians to stay away from the elite. One woman dared to cross over to wish a friend “Subho Bijoya” and was halted peremptorily, “Odike keno jachchen? Apnar odike jaorar katha na.” Interestingly, as this woman’s badge was in her purse, this volunteer only needed his perception of status (Or was this caused by gender?) to justify his insolence.

Interestingly, about 1/4 of these privileged rows, except for the very first row on the left, were mostly occupied by orange cardholders, not the color de rigueur! About 1/2 the seats in the orange section, bespoke of ownership with strewn shawls, bits of paper and brochures. An interesting note: most of the vacant seats in both the elite section and the orange section went unclaimed through the 3 days of celebration, despite the yellow tape and the visual claims of ownership!

The indignity of being tagged “orange,” was intensified by the fact that, in conjunction with the yellow cautionary tape, orange signified, “Danger! Be careful of these unimportant people!” In addition, the lighting system was placed in the midst of the outcasts, after the elite seats. Three chairs marked off the lighting system, three chairs that went unoccupied as the light man stood erect the entire time, fiddling with the various knobs as a child would with a new toy and aiming the lights at all and sundry, frequently missing the real subject. The fact that he was not transparent and clearly obstructed most of the people behind him did not seem to concern him as he obstreperously defied all requests to sit down.

The last night of celebration at Kallol has been, for the last few years, one of greeting, contemplation, and classical music. This year the penultimate program was one of songs and sarode. As the artists on the stage announced their last presentation, one of Kallol’s volunteers shooed them off the stage, dismissing requests and protests from the audience. Even the boos from the audience, both citizens and non, did not pause the proclamation, “We are running late and there’s another program.”

Several people complained about the rude, crude, and obnoxious behavior on display through out the festivities. Most of the complainants were either women or visiting parents. While the former group is not unexpected, as other women, in other contexts, have spoken about the misogyny that infests Kallol, the revelation from the latter came as a surprise. It is worthy to note at this point that it was Durga who was being celebrated, the Sacred Feminine, Shakti. To borrow loosely from a noted writer, oh, how the borders of our belief of a celebration shrank back in the hands of a few of Kallol’s officious officials! As someone remarked sadly, “Kollol’e beno jol dhuke geche onek, etai dukher byapar.”

The bottom line is some of us were deliberately slighted, insulted, and mistreated. What a nice way to mark bangalider shrestho celebration!

NOTE: OPINIONS EXPRESSED IN THIS ARTICLE ARE THOSE OF THE AUTHOR ONLY.