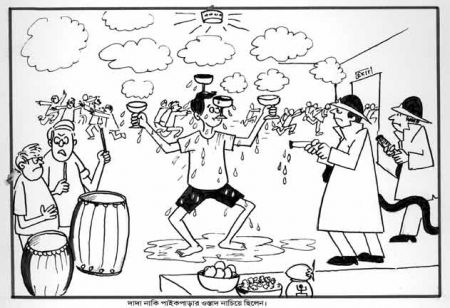 After three days of hectic scrambling, managing thousands of registrants, the blaring music from the entertainers and the long dinner lines, Kallol Pujo celebrations have finally come to an end. Although many skeptics were not sure about how the Pujo would fare out, especially when many people were not happy when Kallol had announced the closure of their registration due to full capacity, overall the people who attended were quite happy. The crowd was well managed and as far as I know, nobody was turned back due to their failure to register early. The new full sized idol of Maa Durga and her entourage was something that attracted many to stand for few extra minutes before the Goddess than before. The simple styling of the idol reminded many of us of our local Puja’s back home. The ample “adda” space all around was also utilized very well. The vendor stalls were quite crowded (except not many seemed to open up new accounts with BoA), especially the food vendor made a killing with $2.00 mini veg chops. The community dinner served in the tents was as predictable as ever, however the lines moved quite fast on all evenings.

Kallol, this year, arranged for a wide variety of entertainment programs. Friday evening’s star attraction was the famous “Bangla” band “Cactus”. I have listened to Cactus earlier, and I like their music. This time too, they did not disappoint me. Their renderings of Gautam Chattopadhyay’s famous songs (from Mohiner Ghoraguli) were extremely good. Cactus is a rock band, and they don’t make any pretensions about it. And unlike many of the mushrooming bands of Kolkata, these folks sing in tune. Their lyrics are not their greatest strength, but under those blaring guitars, bass, keyboard and drums, who’s following the lyrics anyway? The huge decibels of their delivery, emptied the first few rows of the Kallol seniors very quickly and made room for the young crowd to gyrate and stomp to the tunes of Cactus who also proved that they are equally good with the traditional Bangla music, be it the Baul melodies or the popular Tollywood numbers.
On Saturday, the evening started with a show by the kids of Kallol a dance extravaganza presenting the folk and modern dance forms from the different parts of India. The show staged about forty kids, from toddlers to teens, and they did a wonderful job. The show was directed and choreographed by Sunrita Mitra. This was followed by a play in Bengali by the members of Kallol. Adapted from Dario Fo’s famous play “The Virtuous Burgler”, “Taskar Brittanto” is an excellent comedy that when executed properly can have a major impact on the audience. This presentation, as the director Debi Prasad Palit himself admitted during the curtain call, was not adequately rehearsed. The lack of preparedness on the part of the actors and the director showed, the comedic timings were miscued, some lines missed and the erratic editing of the script caused hiccups in the flow. However, the people still enjoyed the play due to a working audio system and the power of the dialogs. A little more care and imagination could have resulted in an unforgettable experience.

After the play, the two of the guest artists from Kolkata came on stage. The first was Bratati Bandopadhyay, who recited a bunch of poems with her customary musical accompaniment. Here renditions were pleasing to the ears, but I had a feeling that she failed to connect to her audience. Shampa Kundu, who came on stage after Bratati, however did connect quite well to the Kallol crowd. Her wide repertoire of songs, ranging from the music of the late nineteenth century to the contemporary, catered to the entire spectrum of the audience. Although she took couple of songs to warm up, but as the evening progressed, her vocal prowess became quite evident and she enthralled the audience with her pleasing tonal quality, smart selection of songs and her on stage demeanor.

The Sunday evening entertainment was a real contrast between tradition and popular culture. The evening started with a classical vocal presentation by the young and promising musician Shounak Chattopadhyay. Shounak started his concert with a vilambit jhaptal kheyal in Raga Behag, followed by a teental drut. His next rendition was a small composition in Rag Desh from which he switched to a Randra Sangeet and a tarana in the same raga. He concluded the concert with a bhajan in Raga Bhairabi, the famous “Bhavani dayani”, an appropriate musical invocation to Maa Durga. Shounak’s rendition spoke volumes about his potential as a classical vocalist – his clean and copy-book style exposition during the vilambit, his crisp taans demonstrate that he has been working on his craft quite diligently. The only thing that he now possibly needs to master is to pour his heart into the music and give it some feeling that can touch his audience’s soul. He looked a bit disturbed, maybe he was under the pressure to finish his concert and make way for Babul Supriyo to come on stage. The huge audience was also getting impatient, they wanted their popular artist to come on stage and render some high octane Bollywood numbers, rather than listen to a young classical vocalist. Shounak was ably accompanied on the tabla by Sameer Chatterjee and on the harmonium by Kedar Naphade.

The grand finale of the evening was the presentation by Babul Supriyo. After spending about fifteen minutes to adjust the sound, Babul stabilized and bolted out one after another popular numbers from Bollywood and Tollywood. His cheesy comments and jokes often fell flat on his audience, but his music was quite well received, especially by the young crowd. He invited the beauties from the audience on the stage to dance to his tunes and too many were eager to oblige causing enough stress to the organizers. The stress heightened when he invited a bunch of kids to the stage and got the volunteers and stage managers panicking to prevent an accident (which could have potentially resulted in severe unpleasant consequences). Thankfully, nothing untowardly happened. Babul even pulled up one of the senior most members of Kallol, Ajit Rakshit, and made him dance to his rendition of “Khaike paan…”.
Babul was possibly well prepped up to cater to the wide range of his audience’s age and taste, and he delivered by singing not only the recent and popular numbers but also several oldies from Manna Dey, Hemanta Mukherjee and others. Overall, Babul tried his best to impress his audience, but the question remains as to whether he was worth the money spent on him. I saw many people nodding their heads in disappointment stating that these songs could have been possibly rendered by many talented singers at a fraction of the cost.

So this was Kallol’s Durga Puja celebration. I am sure the other Pujo’s (which I missed) were also equally enjoyable. I’d like to hear about them too.

Wishing everybody a Happy Bijoya.
Sudipta

1 thought on “Another Successful Durga Puja by Kallol of NJ”