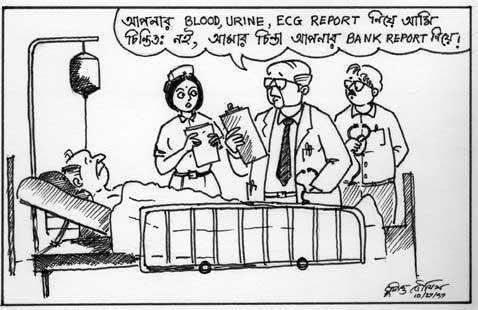 I drew this cartoon long time ago to highlight the healthcare cost crisis. For the benefit of the readers who don’t read Bengali let me explain it a bit. The doctor looking at his patient’s charts comments that he is not concerned with his lab reports but he is concerned about his bank statement reports which of course is not good enough to bear the cost of treatment.
Healthcare cost management, one of the major election issues last year, is once again in the back burner – being overshadowed by the economic meltdown. Although the recent economic stimulus package contains a provision to modernize health-care record keeping which can potentially reduce some of the costs and also provide for some computer programming jobs, it can hardly put a dent on this monstrous problem. Health-care cost is poised to be the next bubble to burst and it can also have devastating effects on the population and businesses. This needs to be dealt with as soon as possible before the entire system disintegrates. Many hospitals are reporting higher rates of ER admissions for patients without insurance. This is expected with the high unemployment numbers. Soon the hospitals will be asking for bail out money.
The current method of cost reduction as practiced by the insurance companies and HMOs has not been working for a long time, at least not in the patients favor. The medical practitioners have been forced by the HMOs and insurance companies to avoid treatment as much as possible. A patient is treated based on the amount he (or his insurance company) can pay and not based on what they need. Remember the finger attachment case in Michael Moore’s Sicko? I have seen in doctor’s offices, clear instructions for the nurses and attendants to ask the patient if he/she can pay for a specific test or procedure before conducting it.
The doctors spend minimum time with their patients because the reduced compensation per patient forces them to increase their patient count. The doctors rely more on the lab reports and mechanized algorithms rather than spending time to solve the unique medical puzzle each patient poses. I don’t blame the doctors, they simply don’t have the time.
The medical costing structure is another huge puzzle. I just cannot understand what kind of costing method does the hospitals use. When their astronomical bills gets sized down to a fraction of their original amount by the insurance companies, I fail to comprehend how could these hospitals survive. Since most patients have some kind of insurance, I am sure none of them agree to pay those huge bills and only pay a highly reduced negotiated amount. And since the hospitals are still surviving and their employees getting paid, I am sure that the negotiated amount they receive serves them well. So why this inflated bill in the first place? Is this notion of high health-care cost nothing but an illusion? Only an imaginary crisis? I am sure there is some explanation for all this. However, I think that if the hospitals and medical practitioners had charged the typical insurance company negotiated rates to the common public, then many would have been able to pay them without going through insurance companies. The businesses who employ their patients also could have easily picked up the bill without going through the insurance companies any pay them the hefty middle-man charges.
Many smart people have looked into this problem and they must have found the problem complex enough to leave it unsolved. However, the only worry I have is, if these problems turn out to be “greed”, “special interests” and “lobbies”, then we are in for another disaster. The sub-prime crisis, the credit crunch and the Wall-Street meltdown should have taught us enough lessons – only if we learn from them.