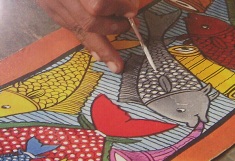 June and July of every year seems to the season for Indian regional conferences held all around USA.  These conferences, mostly based on regional languages of India, are typically  held during the July 4th weekend and celebrated along with the American independence day.  North America Bengali Conference (NABC) also known as Banga-Sammelan, used to be the only such cultural conference held in major North American cities to celebrate Bengali arts and culture. But these days, multiple such Bengali conferences are held around the same time. Besides NABC, we now have Bangamela and Regional Bengali Conference. Last couple of years we have also seen the famous Ananda Bazar Patrika (ABP) group hosting a Bengali festival of their own, in the same model as NABC and others.  This list of course excludes similar such conferences held by Bangladeshi Americans.  While this gives the ever growing Bengali population in America ample options to chose which festival to attend, it kind of dilutes the original motivation behind these conferences – to provide a platform to the expat Bengali to showcase their talents. In reality, these conferences have turned out to be commercial ventures targeted to attract the consumers of pop culture and entertainment. Well, to be fair, the organizers do throw in a couple of classical music performers, or a literary seminar, or arts and crafts exhibition, but these events are neglected both by the audience as well as the organizers.  Unless the audience demands for such events, why would the organizers feel obligated?

Let’s take a look at the line-ups for these major Bengali conferences. Bangamela 2012, to be held during July 13 to 14 in Washington DC, will  feature singers like Subhamita Banerjee, Saheb Chatterjee, Rezwana Choudhury Banya, Ferdous Ara and many others. Sahid Parvez on Sitar, Debajyoti Bose on Sarod will grace the  classical music stage. Nandikar, the famous Bengali theater group from Kolkata will stage their latest play with Debshankar Haldar, Sohinee Sengupta, Rudraprasad Sengupta and Swatilekha Sengupta. The event will also feature a one act drama competition with participants from the surrounding states.

Regional Bengali Conference will be held at the North Atlanta Trade Center, Norcross, GA from June 29th to July 1st. The artists include Saheb Chatterjee, Abhijit Bhattacharya, Srikanto Acharya, Indranil Sen, Tanushree Shankar, Ujjaini and others. It will also feature a film festival which will be inaugurated by Sandip Ray.

NABC 2012, which is still the largest of the Bengali conferences, will be held  in Las Vegas, Nevada. Las Vegas,  also known as the playground of America, is a popular tourist destination especially for its spectacular hotels and casinos. It is one of the topmost vacation spots in the country and features all sorts of entertainment that one can enjoy.  Las Vegas was chosen most likely to attract people from all around USA, especially from the West Coast. Although the summer heat in Las Vegas may inhibit outdoor activities during the day, but most likely it will keep the Bengali audience indoors tied to their seats in the air conditioned auditoriums. NABC 2012 had initially announced a long list of celebrity artists. However the final list (till date), although not as attractive, is still quite impressive. Shankar Mahadevan along with the trio Shankar-Ehshan-Loy, Kavita Krishnamurty, Rupam Islam. Somlata, Sriradha Bandopadhyay, Abhradeep, Fossil, Lakshman Das Baul, Rezwana Choudhury Banya and many others will dazzle the music scene.     Bratyojon will be staging their new play Byomkesh, directed by Bratya Basu. Film and theater stars from Kolkata will be staging Shesher Kobita (although it is not clear who the actors are). The classical music section includes Pandit Jasraj, Ustad Asish Khan, Pt. Swapan Choudhury, Abhijit Banerjee, Shubhangi Sakhalkar and Suman Laha. The literary seminar will feature novelist and short story writer Swapnomoy Chakraborti, poet Bithi Chattopadhyay and journalist Gautam Bhattacharya. Dancers like Sutapa Talukdar, Sukalyan Bhattacharya will sizzle the stage. NABC will also feature arts and crafts exhibition, film festival, business meetings, college reunions, and many other events to keep you and your family engaged. But one of the most significant activity will be the events presented by the domestic performers, who will feature some of their best talents and shows. So if you are attending NABC 2012, I’d like to request you to please attend the domestic shows. These events are what NABC was founded for, and they need our full support. You’ll get to see the celebrity performers at many other events, but it is a rare opportunity to get to witness our friends and neighbors from different states and cities who come all the way to share their artistic expressions with you.  Please don’t miss them.