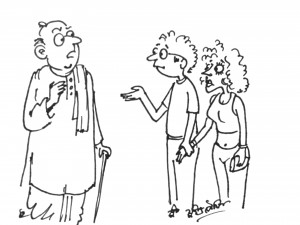 Mike Steward loved to share my Indian lunch and I did not mind spending a part of my lunch break with him occasionally. Mike had a sense of humor and a ready wit. He mostly did the talking and he talked about his family often. His mother’s idiosyncratic personality was the butt of his jokes.  He made no bones about his blue-collar background. His father was an electrician in an auto assembly plant in New Jersey and his mother was an aide in a local Knights of Columbus house. And according to Mike the so-called lower middle class American families have so many old-fashioned ideas and quirks that their worldview some times sounds hilarious. I enjoyed tales about his family, their sometimes-strange relationships, strange and at times funny to me.

One morning as soon as I walked into the office he came straight to my desk. “Big news” he said excitedly “My sister is marrying an Indian guy. And my mother said yes. I will tell you everything later” I of course, was a little intrigued and curious. Mike was of Italian descent. To his mother the world was all about “us” and “them;” It was quite understandable if she was a little leery about getting into the situation.

So, I thought, indeed this was big news. I could not wait to find out what really happened.

The story unfolded over lunch. When his sister, who was a social services assistant in a hospital, disclosed that she was in love with a doctor who happened to be an Indian, her mother went ballistic.  How could her daughter, a pure bred European, marry a person of color?  How can her daughter get into a third world alien culture?  Most of all, what would her family think? She could not bear the ignominy and face her family and friends. “It has never happened in my family” Mike’s mother said. She put her foot down; she would not let her own daughter pollute the bloodline of the family. “Over my dead body,” she announced.

“And then what happened, how come your sister is still marrying an Indian guy?” I inquired.

“I enter the scene,” Mike said. “ I asked my mother could you ever imagine Ma, in your wildest dream that your daughter would be marrying a doctor? “ In his and his mother’s immediate family no one had gone to college.  Mike attended a vocational school for drafting; his sister was a high school graduate. “I had to convince my mother that her daughter was marrying real up and her social standing amongst her relatives would only increase,” he said. His mother acquiesced, albeit reluctantly.

Mike doubted that it was a matter of altruism on his sister’s part either; knowing his sister and her upbringing; he suspected her decision to be simply a matter of climbing up:

“Hypergamy” is the word, which means marrying up. The term is used to mean the inclination of female’s to marry a man higher in status, education and wealth.  There is an evolutionary bias in woman to go for a better and stronger hunter-gatherer and provider and possibly better genes for the children.

All these happened thirty years ago when I was working at General Electric.

Venue: Calcutta, and this time all players belonged to the same race.

My cousin’s only daughter was a very desirable marriage worthy girl by Bengali standards.  Upper middle class with a reasonably wealthy father, she was fair complexioned, good looking and had a graduate degree in English from the University of Jadavpur; a girl seeking a suitable match could not be any better.  Her parents were in the lookout for a groom, a doctor or an engineer as a minimum.  There were many prospective suitors from an insertion in the local newspaper, Ananda Bazar Patrika. To the dismay of her parents the daughter chose someone who only had an undergraduate degree from a run of the mill college. But, something made him stand out: he was a N.R.I. He worked in information technology (read: programming, an entry level coding skill) and lived in America on a temporary H1B visa, which in all likelihood will be changed to a permanent status.  Parents saw some risks there, but for my cousin’s daughter the promise of American life outweighed the risk. My cousin and her husband were disappointed and did everything in their power to dissuade her. Also, they did not consider their prospective son-in-law whose father was some kind of government official in Burdawan to be up to their social and cultural status. They were vehemently against the proposal, but the daughter prevailed. The family thought she was actually marrying down (Hypogamy as opposed to Hypergamy); like Mike’s mother did.

The original definitions of the words Hypergamy and Hypogamy need revision in today’s world.  After decades of the feminist movement the perception of women power has shifted.  Women are not the only ones looking for security and upgrading of social status in marriage. Men also want to marry up as in the case of   the H1B groom’s. Marrying up and marrying down are two sides of the same coin. What one side considers a Hypergamy, to other side it may be Hypogamy or may be not. In reality marriage by choice is always an act of Hypergamy from the participants’ point of view; although the considerations are different in each case. To some it is perception of racial superiority; to others it is social climbing and to some as in the case of my cousin’s daughter it is moving to a better life offered by America. To the parents it is a class-divide be it racial or social.

In spite of all the liberalization of value system and feminist movement the concept and the consideration of class still exist in real life. I would not condemn Mike’s mother as bigoted and ignorant; racial bias is a reality all over the world; the Indian equivalent of casteism. Interracial marriage may not be a big deal today but miscegenation was illegal in some states in the United States no more than fifty years ago. Barriers still linger today. Marrying a non-white is still considered an act of marrying down in larger Euro-centric white society.

Indeed, I do not see Bengali parents jumping for joy if their children marry a Caucasian person.  Marrying outside one’s own tribe always involves crossing a threshold.  But the same parents are often more accepting of a Caucasian son or daughter-in-law than they would be of son or daughter-in-law of another Non-Indian race. In the back of their mind their children are actually marrying up racially when they marry a white.  Don’t be ashamed if you are one of them; this is the way the colonial era colored our values. In the postindustrial-revolution era Europe dictated standards of ethics, aesthetics and culture and it still does particularly in the once colonized societies as ours. The fact is, we still look up to them.  For us whose skin color ranges from dark brown to swarthy, fair complexion is the yardstick for prettiness. When our average height is 5’5”, tallness defines handsomeness. Our standard is based on how others look but what we are not.

So you could not honestly disagree with Mike’s mother if she believed that for her daughter marrying an Indian man would be case of Hypogamy or marrying down.

So why do so many Caucasian men and women choose darker skinned Bengali spouses?  It is plausible that for them the dark-skinned partner of choice has a better education, better resources and better potential, and also promises a better life; they are seemingly driven by the age-old consideration of hypergamy.

But breaking the class barriers, social or racial has its benefits.

My cousin’s daughter now lives in America, in a big house and drives a BMW.

I have no knowledge of how Mike’s sister has fared, but consider the case of Antonia Edvige Albina Maino (a.k.a. Sonia Gandhi), a white Italian woman. A one-time restaurant waitress and the daughter of a brick worker, she married so up as to catapult her to the position of the supreme ruler of the largest democracy in the world.