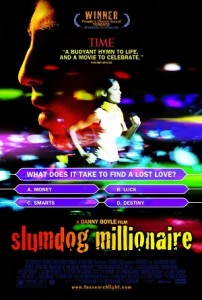 When you watch Danny Boyle’s latest rags-to-riches fairy tale “Slumdog Millionaire”, you’ll experience an emotional roller-coaster ride that only Mumbai can offer. The city that never sleeps, the city that is in the center of the center of the world (as mentioned by Salim in the movie), a city that has an economic and social contrast ratio of 20,000,000:1, reveals itself on the screen as Danny Boyle and his screen writer Simon Beaufoy (based on the novel Q&A by Vikas Swarup) masterfully crafts the film using the television game show “Kaun Banega Crorepati?” or “Who wants to be a Millionaire?” as the spine of the story. Indian slum and street life has been explored by many international film makers like Mira Nair (Salaam Bombay) and Roland Joffe (City of Joy) amongst others, but Slumdog brings to life the dark as well as the bright side of the city of Mumbai in a style that is shocking and heart warming at the same time. END_OF_DOCUMENT_TOKEN_TO_BE_REPLACED

Like me, if any of you watch ETV Bangla in your homes, you must be watching this new tele-serial “Dhoop Chhaya” or “Sun and Shade” the latest remake of “The Godfather”. Since Francis Ford Coppola made his classic mafia-gangster movie trilogy and created film making history, there has been several attempts to make films inspired by these great classics. Ram Gopal Verma made his Sarkar and Sarkar Raj adapted directly from the Coppola classics with the Bachchan father son duo – Amitabh and Abhishek. And now ETV Bangla is doing their share – “Dhoop Chhaya” a new tele-serial directed by Debangshu Sengupta and produced by Atanu Roy. The story revolves around the mafia family of Raghuram Pathak (Don) whose hot headed son Uday Pathak (Sonny) and the more refined Parashar Pathak (Michael) rule the Kolkata underworld. The opening episode looked so much like that of the opening sequence of Godfather (I) that I expected to see a shot by shot remake. The serial even has the family counsel Tom Hagen’s (Robert Duvall) character is played in this serial by Saswato Chatterjee. However, the serial has now taken its own twists and turns, and like most serials, the believability of these plot twists are questionable. But overall, the serial has the intensity to keep the viewers glued to the screen. The acting overall is at par and in some instances, quite good. Another positive aspect of this serial is the presence of some fresh new faces. It often becomes tiring to see the same faces in all serials. Sometimes it becomes difficult to figure out what serial is on – the same actors acting out similar characters in similar story lines. It seems the actors are not at all concerned about over exposure and how it can damage their career as well as the viewership of these serials. Kolkata never lacked in acting talent and we the viewers would like to see fresh talent on our screens. I hope the producers will take notice of this issue. 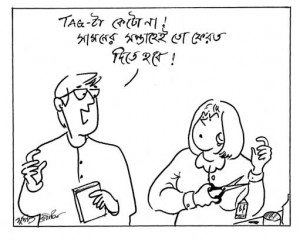