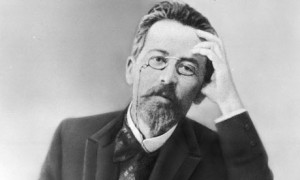 Anton Chekov has been on of the most celebrated playwrights and short story writers of the modern times.  Konstantin Stanislavsky and his Moscow Art Theatre brought Chekov in front of the western audience at a time when Chekov was almost about to give up writing plays. Four of his most famous plays, “The Seagull”, “Uncle Vanya”, “Three Sisters” and “Cherry Orchard”, were all produced and staged by Moscow Art Theatre.  Since then Chekov’s plays have been performed all around the world in multiple languages. In Kolkata, Chekov was made popular by the famous theater group “Nandikar”, and more specifically by Ajitesh Bandopadhyay.  “Swan Song”, one of Chekov’s popular plays, is a touching portrayal of a sixty eight year old stage actor who laments the loss of his youthful days and the apathy of his audience.   Swan Song [1887] was one of his early plays featuring two characters: Vasili Svietlovidoff, a 68 year old comic actor and Nikita Ivanich, who is an even older man, the theater’s prompter. Following a benefit evening in his honor, unbeknownst to everyone, the comic actor Svetlovidov falls asleep in a drunken blur. When he awakens, the theater is dark and empty. He falls quickly into saddened monologue..

The play was also adapted by Ajitesh Bandopadhyay in Bengali as “Nana Ranger Din” and there is hardly any actor who hasn’t attempted this piece in his life. Couple of weeks ago, we did a broadcast of “The Swan Song” on EBC Radio on our EBC Drama Club show. The performers include Dwaipan Mukherjee as Nikita the prompter, and myself as Vasili the actor. The translation is by Marian Fell. Enjoy.

A Bengali friend asked rhetorically “Why do you think quite a few, a significant proportion at that, of our daughters are marrying outside the Bengali community and indeed majority of them preferring white Americans?” He thought he had an answer too, “They have concluded, observing their Bengali fathers I think that the Bengali men are opinionated, argumentative, obstinate, dominating and positively not romantic.”
Well that may be a strong sweeping statement, not based on any poll data or census study; but searching for causality, it is possibly safe bet to make an intuitive conjecture on the subject. I could see through the point my friend was trying to make. Our children have the luxury of wider perspective and many options, as opposed to the situation in our left behind homeland. And they do compare and choose. END_OF_DOCUMENT_TOKEN_TO_BE_REPLACED

[youtube http://youtu.be/u85DqflMe2U] Few years ago, we at ECTA staged a two person play – “Satyameva”. The play was first staged in Kolkata (at the Sujata Sadan) with Indranil Mukherjee and Sankar Ghoshal performing the two roles and I was the director. The play was very well received by the audience and later on Ashoke Mukhopadhyay (who was in the audience in one of the shows), director of the well known group Theater Workshop picked up the play and staged it (renamed as Jodiyo Galpo) on a regular basis with himself as the director and actor along with Krishnagati Mukherjee as his co-star.  The play was revived again in New Jersey by ECTA and this time Indranil  Mukherjee directed the play with Pinaki Datta and me as his cast. The play was staged in New Jersey, Columbus Ohio, Los Angeles California and San Francisco California. The play was also translated and staged in Marathi in New Jersey by Sharad Sathe and his team. Satinath Mukhopadyay, the famous radio artiste, presented this play on his radio show “Aschhe Se Aaschhe”. Still many people have missed this play on stage and requested us to share the video. I strongly believe that a video recording can never offer the same experience as that of a live performance. But to meet the demand of our audience, we are releasing  a complete video recording of one of the New Jersey stagings of “Satyameva…” Also, please be reminded that this recording was done using a single camera without any editing or enhancements and hence the video and audio quality is far from perfect.   END_OF_DOCUMENT_TOKEN_TO_BE_REPLACED

This is the other Bengali convention I am writing about. Not many know that it exists, but it has lived for  last fifteen years, hail and hearty.

The event is organized by Mid America Bengali Association (MABA), a loosely held central body of many regional Bengali clubs from Louisville,  Chicago, Birmingham, Atlanta among other cities. No one owns a franchise and it is made obvious by the apparent absence of claims of ownership by the organizing leaders of the convention. END_OF_DOCUMENT_TOKEN_TO_BE_REPLACED