Often I receive requests from many of my friends to give them an opportunity to watch some of my plays which they had missed. Repeat performances of our plays happen few and far between, hence many a times, a missed show implies a missed opportunity. I have never liked watching plays on video screen, especially when it is captured from stage using a single stationary camera in an auto mode. Hence I have always been reluctant to share our show video archives with my friends.  Theatre is something that is enjoyed best in a live theater setting, along with the other viewers. It is a community event. However, recently I had to succumb to the demands of my friends and released the video of our play “Rajar Chithi” on YouTube, and here they are in two parts. The play was staged earlier in 2011 in celebration of Rabindranath Tagore’s 150th Birth Anniversary and  I have written earlier about it in a previous post. So if you have missed the show, here is your chance to get a glimpse of the production. Just a note of caution: The play will demand your attention as it is a long one (approx duration 1hr 50mins).

Last Saturday (June 15th, 2013) at our EBC Drama Club show, we had three very distinguished representatives from  three different New Jersey Community Theatre organizations as our guests. Patrick Starega from the NJACT (Perry Award) organization representing its member theatres (more than 150), Lluana Jones from Villager’s Theatre (Somerset), and Rich Monteiro from Edison Valley Playhouse (Edison).  The discussion started off with a recent article from Huffington Post by Howard Sherman titled “Theater the Theater Community Disdains!” I asked, why is it that such a negative attitude exists amongst the theater community? And the discussion rolled on, from the objectives of community theatre to the role it plays in our community, to the sensitive issues of ethnicity and diversity in community theatre, the variety and originality of content, and the overall quality of production and talent. Listen to this exciting discussion in the podcast below and join the community theatre movement that is thriving in New Jersey all around us. 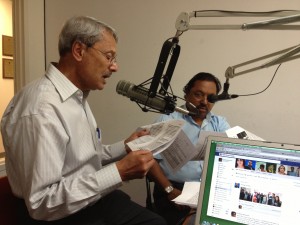