A play by Sudipta Bhawmik
Directed by Ashok Mukhopadhyay

Sanjoy, a young software professional, has arrived in USA, the “land of opportunity”, for just over six months and works for a software body shopping company “InterSoft” owned and operated by Bill (a Bengali American living in the States for over thirty years.) On the day of the play Bill fires Sanjoy and asks him to go back to India. Sanjoy, however, is not happy with this decision and refuses to oblige. He informs Bill that he is not going to return to India under any circumstances. He states that returning to India is synonymous to signing a death warrant for himself. He cannot subject himself to such a grave risk. And to justify himself, and to win his ultimate motive, he has to make a choice between truth or deceit. 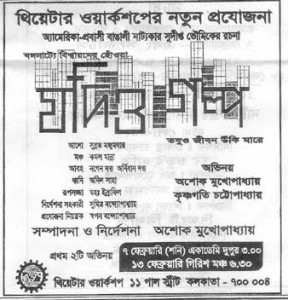