This year something unprecedented has happened. The two major Durga Puja committees have closed their doors to the Bengalis of the area who have failed to pre-register in due time. Kallol organizers tell me that they are completely sold out and do not have space for a single extra person. They had to express their inability to accommodate hundreds of people. Apparently this year the township authorities have clamped down with severe restrictions on the number of people that can be accommodated at the Ukranian Cultural/Community Center hall where Kallol celebrates its Durga Puja. It is envisaged that the township authorities will be inspecting the venue every day during the festival during the peak hours. END_OF_DOCUMENT_TOKEN_TO_BE_REPLACED 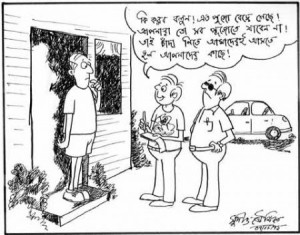 In several of my earlier blog articles, I wrote about our sensitivity to paying Durga Puja contributions (popularly known as Chaanda). The Puja organizers have tried to be innovative in extracting (no I never said extorting) the funds from the pockets of the attendees – they suggested (very strongly) donation amounts which partially resolved the problem but not the unpredictability. They have now resorted to early registration to ensure the committed funds (doesn’t matter if the contributors fail to attend due to weather or personal issues) and again they are successful to a great extent (Kallol has stopped early registration two weeks in advance and have declared “House Full”). END_OF_DOCUMENT_TOKEN_TO_BE_REPLACED

The most awaited event for any Bengali, the Durga Puja festival, is less than two months away. Kallol of NJ will be celebrating this festival during the weekend of October 3 to 5, 2008, while Garden State Cultural Association will have a concurrent celebration on Oct 4th and 5th. Having a concurrent celebration has its pros and cons. On the positive side, it helps to divide the audience which otherwise becomes impossible to manage at a single venue. The negative aspect is that many of us, who would have loved to attend both (and attend them completely), are denied of the opportunity.
However, even this joint celebration (I mean the dates only) is not helping the organizers. Depending on what performers are being invited from Kolkata or Mumbai by these organizers, crowd management becomes a major issue with frequent interruptions and threats from the Fire dept. Inviting these famous artists to perform during the Puja is a double edged sword. You need to get the popular star performers to pull in the crowd because it is them who pays for the enormous expense. On the other hand, too many people cannot be accommodated in the spaces the organizers typically use. END_OF_DOCUMENT_TOKEN_TO_BE_REPLACED

The Cultural Association of Bengal (CAB) every year honors a group of people for their outstanding contribution to the society. This year, one of our closest friends, Pronoy Chatterjee has been awarded the “Distinguished Service Award” for his contribution towards promoting and nurturing Bengali literature in North America. His award letter reads,

You are one of the foremost literary personality in the United States who has helped the cause of propagating and nurturing Bengali culture in North America, the goal the Cultural Association of Bengal cherish. You have done so as founder of NJPA and through years of association with Kollol of Jew Jersey, Ananada Mandir and other well known organizations. Your contribution to literature and work on arsenic cleaning in water is also well known.
In recognition of your dedication, we have the honor to award you the “Distinguished Service Award’ during the 28th North American Bengali Conference.

Pronoy Chatterjee is an ardent author, has written two novels (a review of one of his books appear in this blog) and has been an editor or several Bengali magazines including “Kallol Sahitya Sambad”, “AnandaLipi”, “Ananda Sangbad” and many others. He has that magical ability to inspire people around him to be creative, to develop their literary skills that have been dormant in them, and to enrich the lives of the community members through their creations.

My heartiest congratulations goes to Pronoy-da for this well deserved award.