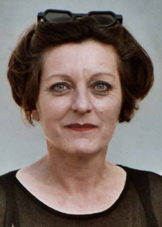 Herta Müller was born on August 17, 1953 in the German-speaking town Nitzkydorf in Banat, Romania. Her parents were members of the German-speaking minority in Romania. Her father had served in the Waffen SS during World War II. Many German Romanians were deported to the Soviet Union in 1945, including Müller’s mother who spent five years in a work camp in present-day Ukraine. Many years later, in Atemschaukel (2009), Müller was to depict the exile of the German Romanians in the Soviet Union. From 1973 to 1976, Müller studied German and Romanian literature at the university in Timi?oara (Temeswar). During this period, she was associated with Aktionsgruppe Banat, a circle of young German-speaking authors who, in opposition to Ceau?escu’s dictatorship, sought freedom of speech. After completing her studies, she worked as a translator at a machine factory from 1977 to 1979. She was dismissed when she refused to be an informant for the secret police. After her dismissal, she was harassed by Securitate. END_OF_DOCUMENT_TOKEN_TO_BE_REPLACED