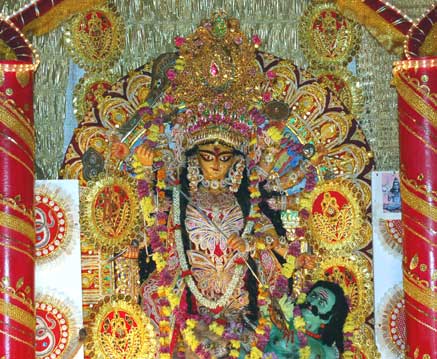 Bengali Associations of NJ are gearing up for the biggest festival of the year – Durga Puja. This year the festival starts quite early, around 25th-26th of September. Kallol, GSCA and Anandamandir will be celebrating their Durga Puja during that weekend.  And just like last year we should expect that the registration to start soon. GSCA has already opened their online registration, and Kallol is expected to open theirs in early September.

Last year (2008) was the first time when Kallol of NJ started their online pre-registration process and it caused quite a bit of furor amongst the Kallol regulars who failed to register early. The registration window was closed as soon as the guest count limit was reached and that left many people with a bad taste.  Some people were able to get in at the last moment (I don’t know how) but several people had to go back. I think Kallol needs to do something about this. END_OF_DOCUMENT_TOKEN_TO_BE_REPLACED

One of the key advantages of living in the United States was cheap gasoline and the joy of driving. But it seems that it will soon become a luxury of the past. Gas prices are going through the roof, and we are all suffering. The trouble is, the fundamental requirement to live in the suburbs is to be able to drive a car. We do not have a rickshaw stand nearby where we can walk to and hop into a human driven (absolutely green) vehicle and merrily coast to the local grocery store. It will be a major human rights issue if someone even dreams of such an entrepreneurial venture. Hence we have no other option other than trying to save on gasoline costs. END_OF_DOCUMENT_TOKEN_TO_BE_REPLACED